Also known as the Nine Emperor Gods Festival, the Phuket Vegetarian Festival celebrates the Chinese community’s belief that abstaining from meat and other stimulants during the ninth lunar month of the Chinese calendar will help them obtain good health and peace of mind.
Held over nine days, it is considered by many to be the most extreme of Thailand’s festivals with devotees giving up meat for the duration and a few select participants, or mah song, practicing self-mutilation in the form of piercing their cheeks with swords, walking on hot coals, and climbing ladders made of knife blades.
The festival is celebrated throughout Thailand by people both with and without Chinese ancestry, with the largest celebrations taking place in Phuket. The Vegetarian Festival is lively and loud with a crowd of people gathering around the procession while chanting and throwing fire crackers. Participants wear white, while the entranced devotees who invite the gods to enter their bodies – wear elaborate traditional costumes.

A crowd of devotes gather in every Chinese shrine around the island, followed by an even bigger group of photographers hoping to get the shot of their lifetime. Pieces of orange paper and cloth distributed throughout the crowds are for good luck.
The Vegetarian Festival is an internationally known event, and while it also happens in a modest way in Bangkok around the same dates, it is really a Phuket event. For several days on both sides of Phuket Town streets leading to shrines are lined with food stands displaying vegetarian dishes in all imaginable shapes and sizes. Yellow Chinese flags hang at roadside intersections, stages are set, and temples are decorated.

As with many ancient festivals, its unsure the origins of the Vegetarian Festival. One theory is that the festival was brought to Phuket from China by a troupe of actors in 1825. The group had fallen ill with malaria while performing on the island and decided to follow a strict vegetarian diet and pray to the Nine Emperor Gods to ensure purification of the mind and body. To everyone’s amazement they made a complete recovery. The people celebrated by holding a festival to honour the gods and express their gratitude.
One of the most exciting aspects of the festival are the various ceremonies which are held to summon the gods. Fire walking, body piercing and other acts of self-mortification undertaken by participants acting as mediums of the gods, have become more spectacular and daring each year.
Men and women puncture their cheeks with various items including knives, skewers and other household items. It is believed that the Chinese gods will protect them from harm, and blood and scarring results from these mutilation acts. This is definitely not something the faint hearted. 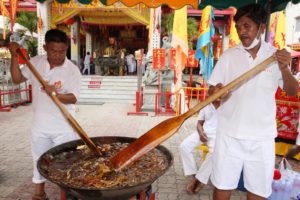 The ceremonies of the festival take place in the vicinity of the six Chinese temples scattered throughout Phuket. The main temple is Jui Tui Shrine not far from the Fresh Market in Phuket Town. The first event is the raising of the Lantern Pole, an act that notifies the nine Chinese gods that the festival is about to begin. The pole is at least 10m tall and once erected, celebrants believe that the Hindu god, Shiva, descends bringing spiritual power to the event.
For the next few days, the local Chinese/Thai community brings their household gods to the temple, along with offerings of food and drink. It is assumed that the household gods will benefit from the annual dose of spiritual energy that fills the temple. Visitors can observe and even participate in the lighting of joss sticks and candles that are placed around the various gods.
The Nine Emperor Gods Festival is observed in China, but the piercings and self-mutilation are unique to Thailand. Some suggest that the piercings were influenced by similar acts that are performed during the annual Indian Thaipusam festival. 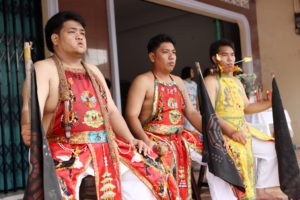 Where to Experience the Vegetarian Festival
The Vegetarian Festival is celebrated in Bangkok, Chiang Mai, Trang and Phang Nga, but Phuket with a Chinese population of around 35% of the total inhabitants, is the best place to experience it. The best shrines in Phuket for witnessing ceremonies are Jui Tui, Bang Niew, Phut Jaw, Cherng Talay, and Kathu. The festivities move between the various temples and it is recommended that you pick up a schedule of events to guide you to the best time and place.
When to See the Vegetarian Festival
The Phuket Vegetarian Festival begins on the first day in the ninth month of the Chinese lunar calendar, so dates change annually. Typically, the festival is held in autumn, near the end of September and beginning of October. The peak of the Nine Emperor Gods Festival is on the ninth, or last day as the ceremony. 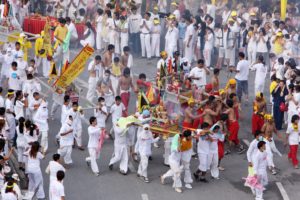 While many tourists attend the festival to see the extreme piercings, you should try the vegetarian food on offer. All participating restaurants and food stalls fly a yellow flag with red Chinese lettering and offer various vegetarian versions of famous Thai noodle dishes. Actually, most of the food is vegan and not even eggs or dairy products are used during the festival.
During the Vegetarian Festival those observing don’t only limit it to diet but also wear white, maintain body cleanliness and agree to keep their body clean, keep up a high moral standard in action, words and thoughts, and abstain from sex and alcohol. Do bear in mind that people in mourning and pregnant or menstruating women are not supposed to attend the ceremonies.
Tourists are invited to attend the procession and take photographs. Although the Vegetarian Festival can appear sensationalist, it is a deeply religious event and you are reminded to show respect at all times.
NOTE:
The 2019 Phuket Vegetarian Festival will be from Sunday 29 September to Monday 7 October. 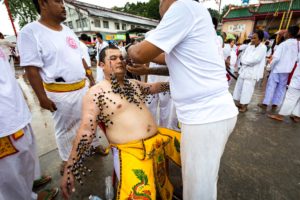