Thailand’s leading province of salt production, Samut Sakhon is a short drive from Bangkok at the mouth of the Tha Chin River and houses one of the biggest fish distribution centers in Thailand. Known to locals as Maha Chai, it is a historic city that was officially recorded in the Ayutthaya Kingdom and to this day remains a place of Ayutthayan influences. 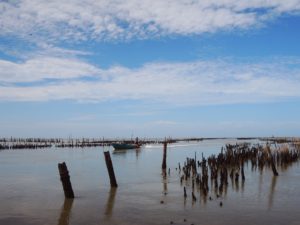 Visit Salt Evaporation Pond. The main source of production in Samut Sakhon is salt and you won’t miss the salt fields along the highway that connects Samut Sakhon and Samut Songkhram. Visitors are invited to stop to watch the farmers hard at work bagging the dried salt.

The City Pillar Shrine is where fishermen light a small candle before setting sail each day, praying for their safety at sea. Every year the locals celebrate the City Pillar Shrine Procession to honour the town’s guardian spirit. The history behind this shrine dates back to the Ayutthaya period when a royal coxswain crashed the prow of the boat King Phra Chao Sua was on. Although he was forgiven, the royal coxswain displayed his honesty and integrity and begged for his life to be taken in following palace’s law. Students in the area still learn this story today. 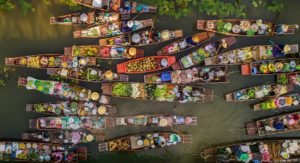 The Tha Kha Floating Market is modest, peaceful and traditional. You can hire a rowing boat to take into the surrounding channels to see the wooden houses and palm sugar factory. Still unspoiled by mass tourism, this is a good option for those who want to discover a Thai floating market, but without the crowds. Tha Kha Floating Market is open every weekend. Don’t expect to find gifts and memorabilia, here vendors sell fruit, vegetables and meals cooked on the boats.

Lopburi Museum is where the ruins of King Narai’s Palace rests today. Built in 1677 during the Ayutthaya Kingdom, it was abandoned in 1688 after the King’s death. Designed by French architects, the palace has both Thai and European elements in its architecture. The museum also holds other exhibitions of Thai artefacts dating from the prehistoric periods.

If you are ready to move on from Samut Sakhon and or if you’re craving some comfort food, Porto Chino is the place. It might not be the most modern shopping mall but it provides diversity to the Samut Sakhon experience. You can find cool cafes, Korean and Japanese restaurants and even a Starbucks here. It also hosts occasional night markets.

Wat Tha Mai is a Buddhist temple in Samut Sakhon known for sacred objects such as amulets and talismans. Many Thai celebrities visit this temple as part of their philanthropy and to take readings from the resident fortune teller. The main building is constructed from wood with incredible carvings and statuary. The grounds are extensive, with much to see.

The Maeklong Railway is a 1000 mm railway that runs for nearly 67 kilometres between Wongwian Yai in Bangkok, and Samut Songkhram in central Thailand. In use since 1905, it ensures better delivery of goods to provinces around Thailand. There is a railway market well worth a visit.

Rent a boat at the Mahachai Market pier and cruise the surrounding canals, visiting the mangrove plantations and fishing villages.

Samut Sakhon may be too quiet for the city seeker, but if you’re wanting to explore a different side of Thailand with a deep tradition and history, this is the place for you.