Locally known as Sop Ruak, the Golden Triangle is the area where the borders of Thailand, Laos, and Myanmar meet at the convergence of the Ruak and Mekong Rivers. The term refers to an area of over 950 000 square kilometers that encompasses the mountains of the three countries.

This northern corner was a stronghold of the Lanna culture that prevailed for centuries and was once called the ‘land of a million rice fields’ and renowned for its scenic beauty. Chiang Rai is a laid-back gateway city on the banks of the Kok river and became the first capital of the Lanna kingdom in 1262, under King Meng Rai, and has landmarks such as the Wat Rong Khun, or White Temple.

The Golden Triangle gained notoriety in the 1920s as an area well-known for the growing of opium, and the name comes from a US State Department memo referencing the practice. The Thai government made poppy-growing illegal in 1959 and brought in crop-substitution programs for farmers with a highly successful project initiated by the Royal Projects Foundation of His Majesty King Bhumibol Adulyadej.

These days the area is a popular tourist attraction with a story of transformation for the communities that live here. The landscape is mountainous, and the area is now peaceful with tranquil dotted hill tribe villages, ancient temples and markets.

On the Thai riverside near the point where the rivers meet, a sandbar becomes visible during the winter months. Here you’ll find a giant golden Buddha on a ship, elephant statues, shrines to the royal family and signs declaring that you are indeed at the Golden Triangle. Take a photo at the gate marking the spot.

On the hill is Phra That Doi Pu Khao believed to have been built in the 8th century. Remains of antiquities can be seen, as well as crumbled Chedis and two large multi headed Naga snakes at the bottom of the stairway protect the temple. On the Thai side of the river where all three countries can be seen from the viewpoint is the Golden Triangle Park, the entrance gate adorned with sculpted elephant statues welcoming visitors to the Golden Triangle.

A good way to explore the gently rolling countryside of the Golden Triangle is by bike. Spice Roads (www.spiceroads.com) offers a two-night cycling tour that starts and ends in Chiang Rai. The tour covers 118km and skirts the banks of the Mekong, visiting local landmarks such as the Opium Museum. Alternately go on a boat ride across to a small island named Don Sao, which belongs to Laos. No visa for Laos is required to make this trip and many small boats offer this service.

The Hall of Opium is a large museum that shows the history of opium around the world and in the area, the process of production and the effects of opium smoking, as well as campaigns that were put in place to eradicate and substitute the crop. Entrance to the museum is through a tunnel with sculpted depictions of people suffering the pain and horrors of drug addiction. There is a section on the British Opium Wars and information on the hill tribes in the area that used to grow opium poppies, as well as information on the successful project initiated by the Royal Projects Foundation that eradicated poppy cultivation in the region giving local farmers an alternative option of growing crops like coffee, rice, flowers and many sorts of fruits and vegetables now sold all over the country.

The House of Opium is privately run museum, unrelated to and much smaller and more serious in tone than the Hall. Lots of opium paraphernalia and information on the production process from beginning to end.

One of the best ways to see this part of the countryside is from the Mekong river. The Luang Say is a traditional teak river barge that works the route along the Mekong River from the heart of the Golden Triangle at Houie Say in Laos, 200 miles downstream to the Unesco World Heritage-listed city of Luang Prabang, also in Laos. The two-day journey slides through the lushly forested countryside, docking in to visit hillside tribal villages as well as a night at a traditional-style lodge in Pakbeng on the banks of the river.

Where to stay in the Golden Triangle

– With views over the Golden Triangle, the Anantara Golden Triangle Elephant Camp and Resort is an award-winning hotel with its own rescue organisation working to bring elephants from the streets of Bangkok to its adjoining camp which is home to 25 elephants and their carers.

– The Four Seasons Tented Camp Golden Triangle has been voted the number one hotel in the world by Conde Naste Traveller and offers an all-inclusive experience with guided tours.

– Imperial Golden Triangle Resort overlooking the Mekong and Ruak Rivers offers accommodations with scenic views and a good base from which to explore the Golden Triangle.

– Numerous guesthouses and hotels can be found on the Thai side of the river, however some visitors opt to stay in Chiang Saen, Chiang Khong and Chiang Rai, and take day-trips from there.

To get to the Golden Triangle there are regular flights from Bangkok to Chiang Rai, from there buses, transfers and organised tours can be booked. It’s also an easy drive from Chiang Saen along the road that runs parallel to the Mekong River, if preferred. 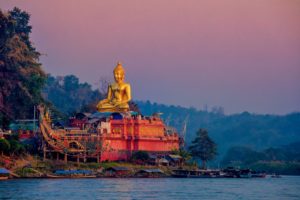