Thai Festivals in the fourth quarter of the year

Thai Festivals in the fourth quarter of the year 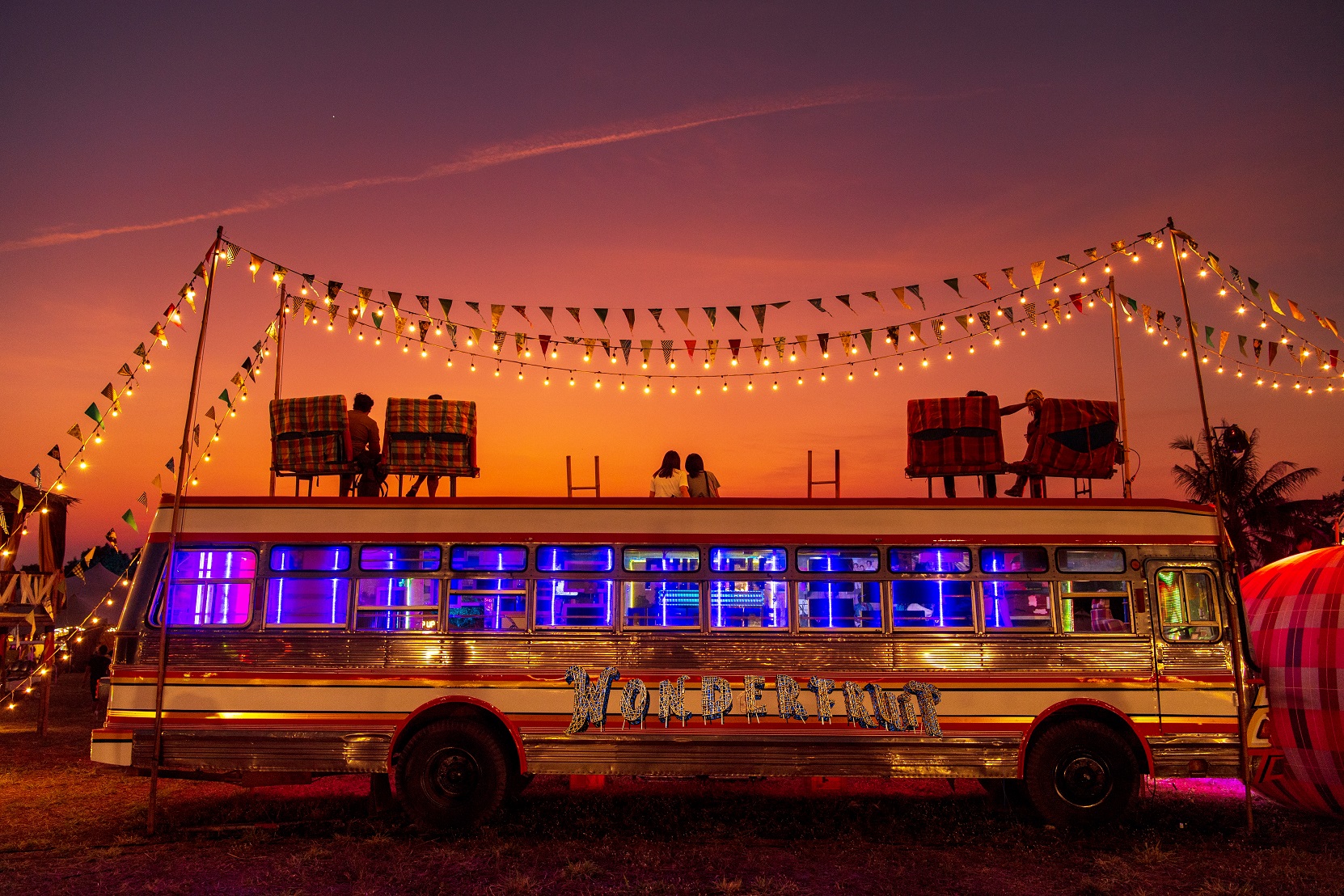 In Thailand there are endless reasons to host a celebration with many festivals marking religious events and marked dates on the lunar calendar. All are wonderful to witness – or better still partake in, and we encourage you to check what is on during your visit. Our quarterly Festival blog posts offer more insight, with these the festivals to look out for in the last months of the year.

Phuket’s Jay or Vegetarian Festival
Where: Phuket
When: October/November

The colourful Phuket Vegetarian Festival celebrates the Chinese community’s belief in abstaining from eating meat during the ninth lunar month of the Chinese calendar, in order to obtain good health and peace of mind. A Thai-Chinese tradition, residents undertake a 9-day vegetarian diet along with the practice of sacred rituals and protection of the Chinese gods, believing they will be cleansed.

The festival is famed for the extreme acts undertaken by some locals, with men and women dressing in white, going into a trance, walking barefoot on hot coals and puncturing their cheeks with swords and knives – believing that the self-sacrifice, body mortification and painful demonstration of their beliefs will bring good fortune.

Ceremonies take place at all the Chinese temples across Phuket, but predominantly at the Kathu Shrine, Cherng Talay, Jui Tui, Jaw and Bang Niew temples. When attending look out for yellow flags at restaurants and street vendors, which denote vegan food. Bangkok’s Chinatown is also particularly busy at this time of year as residents join in the tradition. 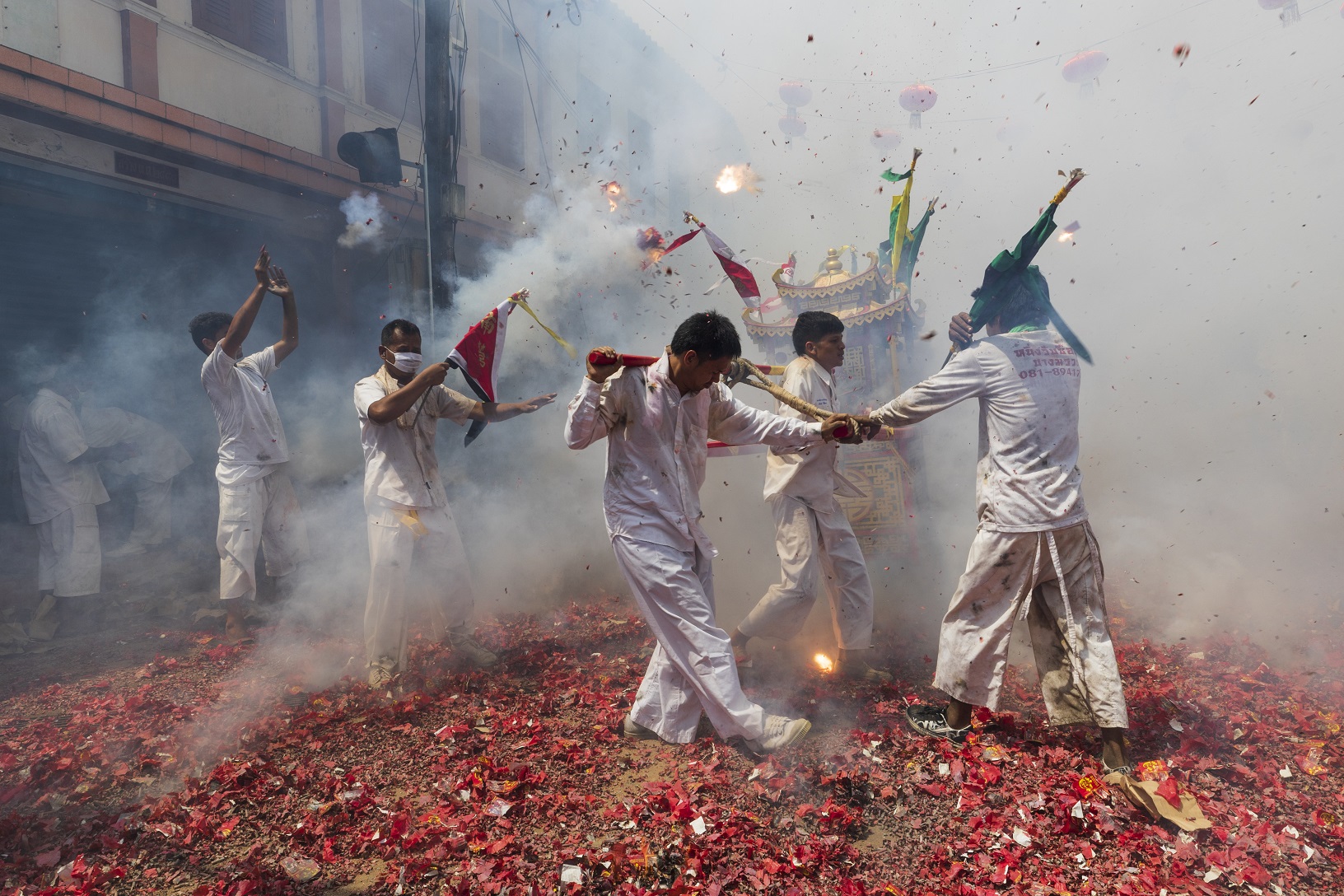 Monkey Buffet Festival
Where: Lopburi
When: Last Sunday in November

Every year the city of Lopburi in central Thailand serves an impressive Monkey Buffet to thank the 2,000 plus long tailed macaque monkeys for attracting tourists to their city. However, the roots of the buffet at San Phra Kan and in Phra Prang Sam Yot temples in Lopburi runs deeper than simple gratitude.

The ‘monkey god’ Lord Hanuman, worshipped in Thailand and India and revered by tradition and legend is honoured here. Lopburi, also known as Monkey City, patiently encourages the resident monkey’s interaction with locals and tourists throughout the year, putting up with their wild antics and allowing them to live and flourish among the ruins of the ancient Khmer Empire.

Located about 150 km from Bangkok, archaeological evidence confirms that Lopburi has been continuously inhabited for at least 3,000 years, making it one of the oldest and most historic cities in Thailand. The city boasts countless ancient sites dating from a variety of civilizations and dynasties.

At the festival long tables dressed with red tablecloths are laid with massive towers of colourful fruit and vegetables, sticky rice, salads and Thai desserts designed in colourful shapes and patterns to please the animals. The non-spiritual feast is also believed to bring good luck to the local townspeople.  There are musical performances featuring the ethnic culture of the region, along with stalls featuring amazing Thai food, contests and displays, all making for a real carnival atmosphere. 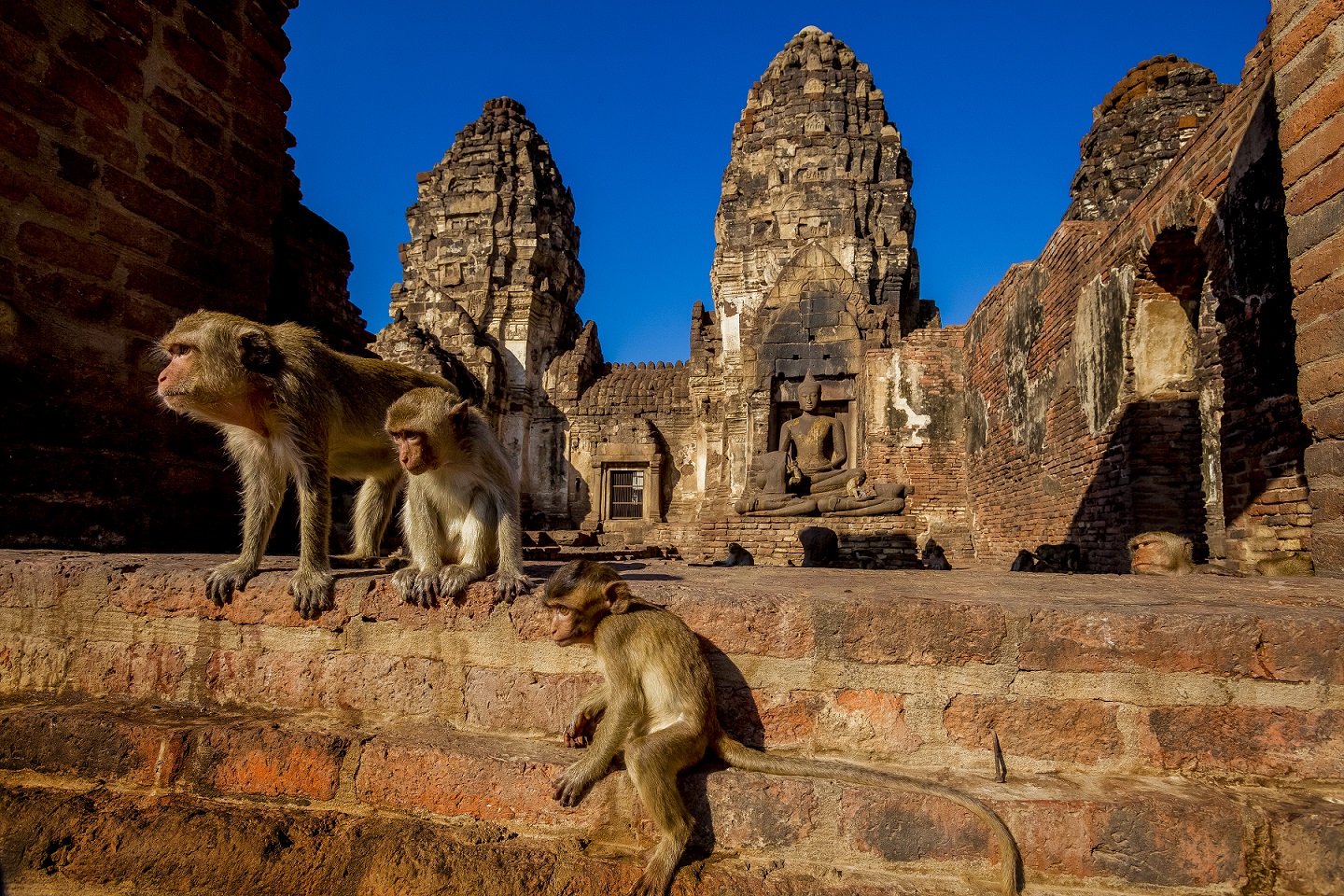 One of the more spectacular Thailand celebrations, the festival of Yi Peng or the Lantern Festival sees people gathering at the banks of the Peng River and releasing thousands of paper lanterns into the sky, watching them float away on the gentle evening breeze. Although more of a tradition than a festival, it is definitely a memorable photo op and ideal for capturing beautiful memories.

You will also witness religious ceremonies, firework displays and parades, most importantly though Yi Peng is a time for Buddhists to release bad memories, make wishes for the future and pay respect to Buddha. The act of releasing a lantern symbolises letting go of the past and moving from darkness into light. It’s an ancient, sacred ritual which originated in the Lanna (northern Thai) kingdom. Traditionally, only monks released lanterns but today anyone can partake in the festivities, provided they are respectful.

Note. Yi Peng is celebrated on the day of the full moon of the second month in the Lanna lunar calendar, so the exact date changes every year.

Krathong is one of the most picturesque festivals in Bangkok with people gathering around lakes, rivers and canals to pay respects to the goddess of water Phra Mae Khongkha for the use of her water by releasing beautiful lotus-shaped rafts, decorated with candles, incense and flowers onto the water. The sight of thousands of these krathongs is truly magical.

The release of these floating objects while offering up a prayer is said to help let go of stress and bad feelings and to cleanse their bad luck. The most popular place to witness this event is the old capital Sukhothai. In Chiang Mai and other parts of Northern Thailand, the Loi Krathong festival also coincides with a Lanna festival known as Yi Peng. The two celebrations usually get rounded together as “Loi Krathong.” 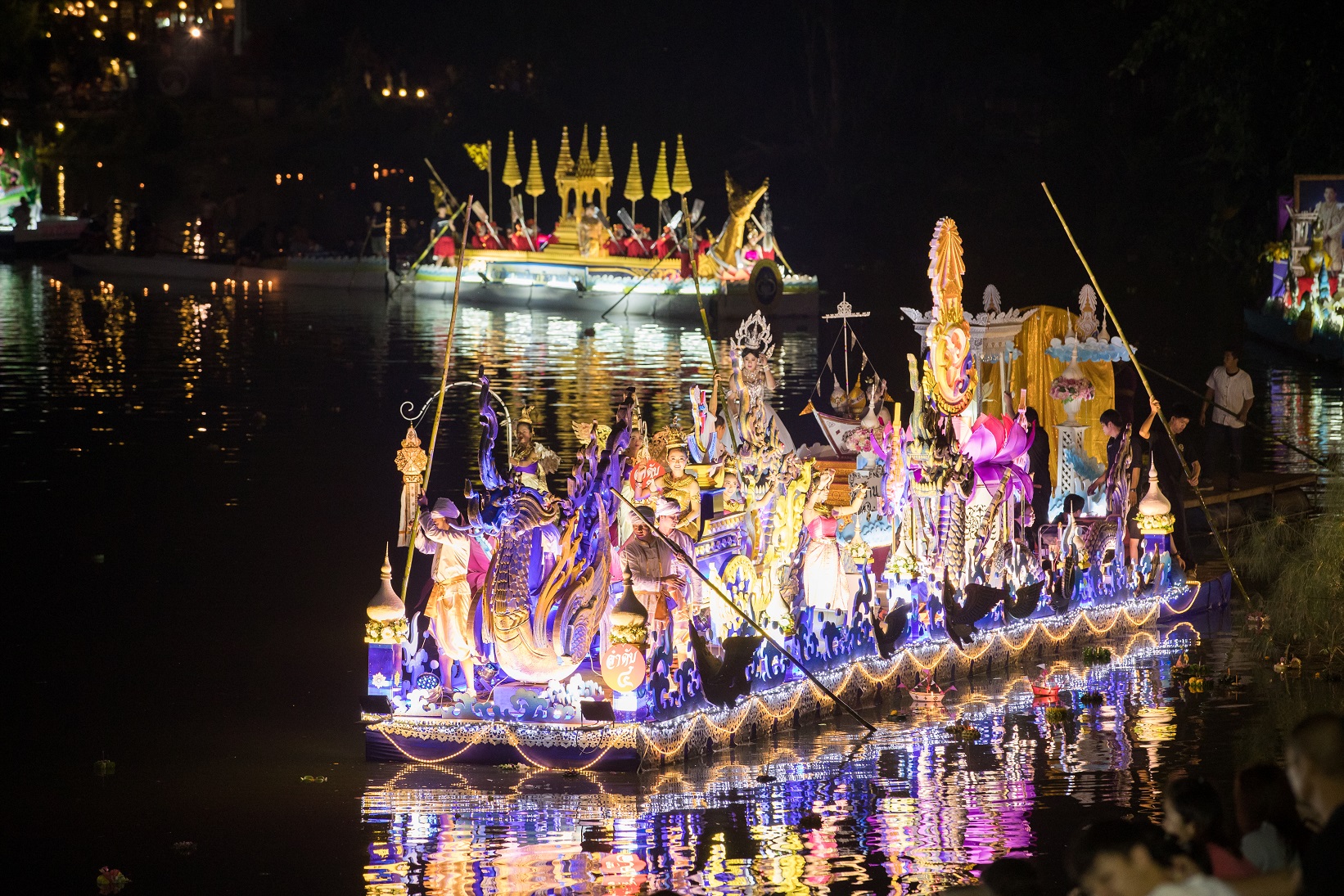 Wonderfruit Music and Arts Festival
Where: The Fields at Siam Country Club, East Pattaya
When: December

The Wonderfruit Festival Pattaya is a three day fun-filled music and art festival that takes place each December on the outskirts of Pattaya each year. With a superb mix of Thai, Asian and Western cultures, it offers an unforgettable journey of musical and artistic discovery in the gorgeous Thai countryside and is built on the six pillars of art and architecture, wellness, farm to feasts, music, family, and talks and workshops.

Wonderfruit packs diverse programs into the four days and four nights, with inspiring discoveries for all ages. With an environmentally conscious ethos, Wonderfruit encourages sustainable living and brings together a global community to celebrate it, proving that decadence and hedonism can go hand-in-hand with social responsibility. For more information see https://wonderfruit.co/ 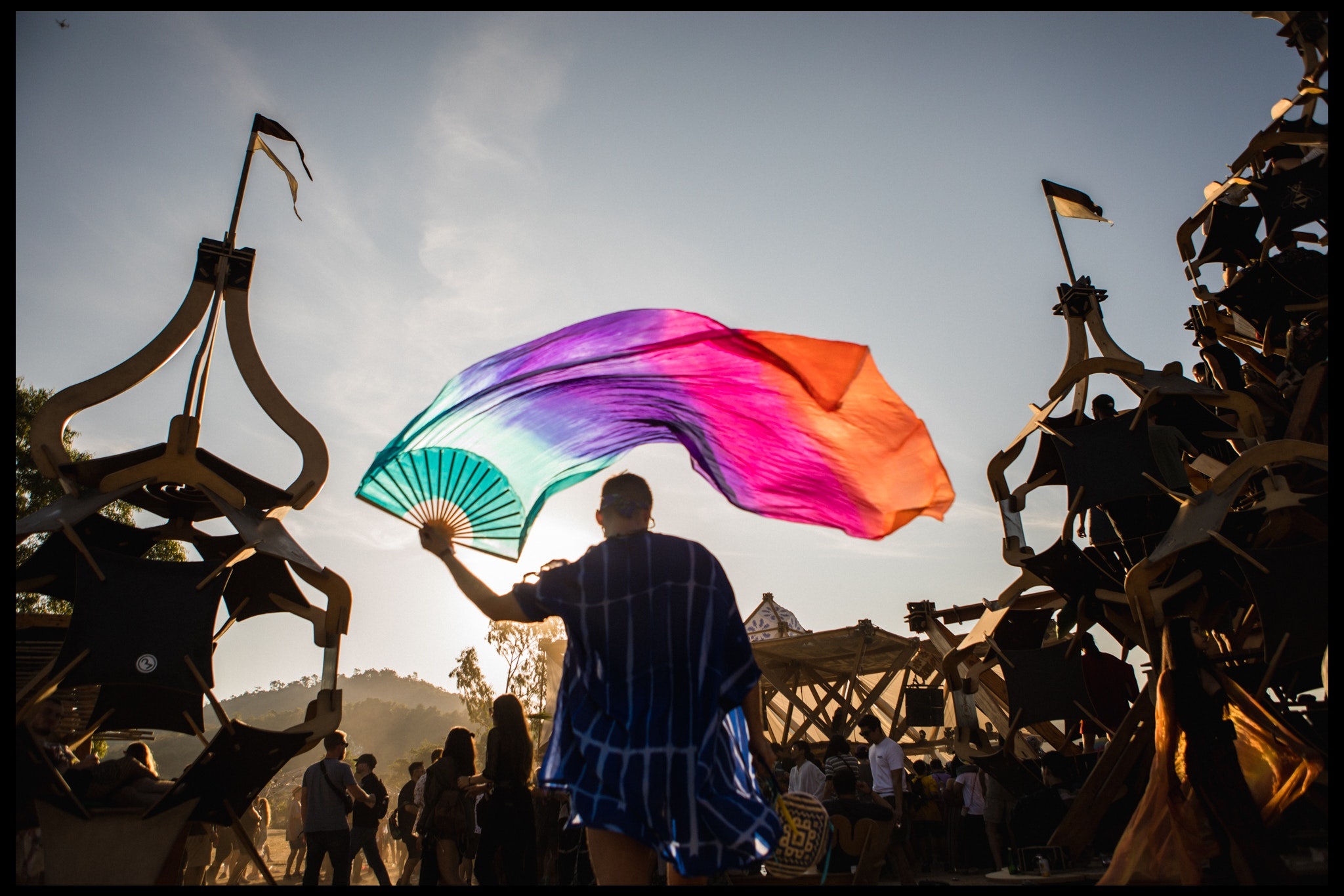