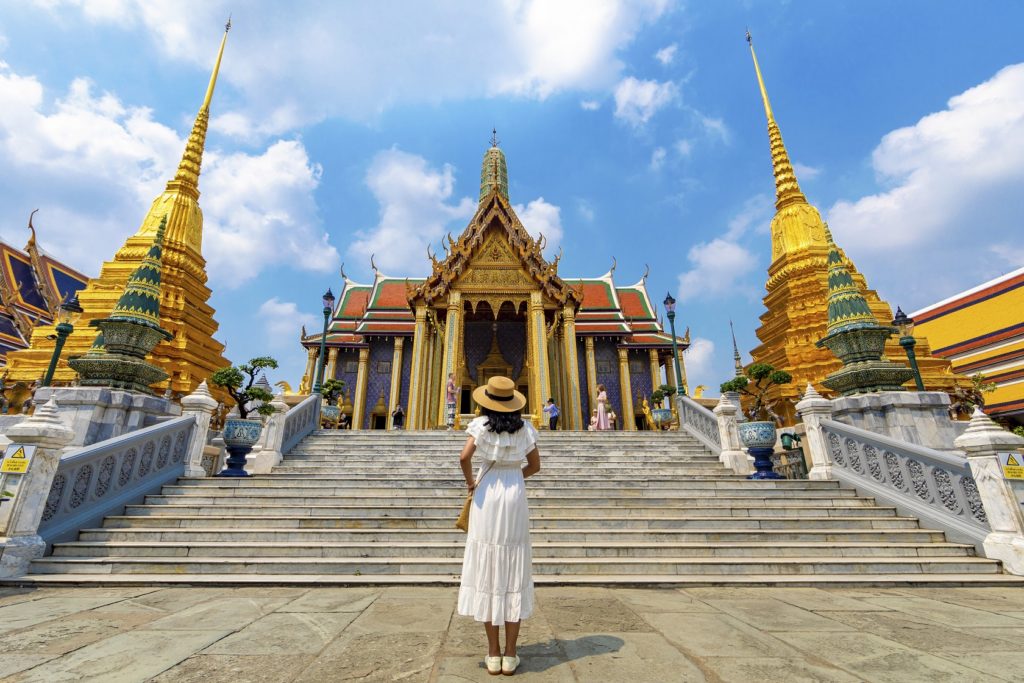 Not surprising therefore that their palaces are of the most beautiful in the world with intricate detail, lavish structures and opulent finishes. While most are constructed in a traditional Thai architecture, those that were built later are greatly influenced by European style. Here are six current and former royal residences that we recommend you see when next traveling in Thailand.

The primary and official residence of the King and likely one of the most popular tourist attractions in Bangkok, the Grand Palace consists of over 100 buildings and structures and you could spend an entire day exploring the grounds. Constructed under the reign of many different kings meant a wide variety of architectural styles are evident in the buildings, some distinctly Thai, others influenced by Chinese and European architecture. The palace is also home to the Temple of the Emerald Buddha or Wat Phra Kaew, which sits inside the ordination hall on the grounds and is regarded as the most sacred Buddhist temple in Thailand. 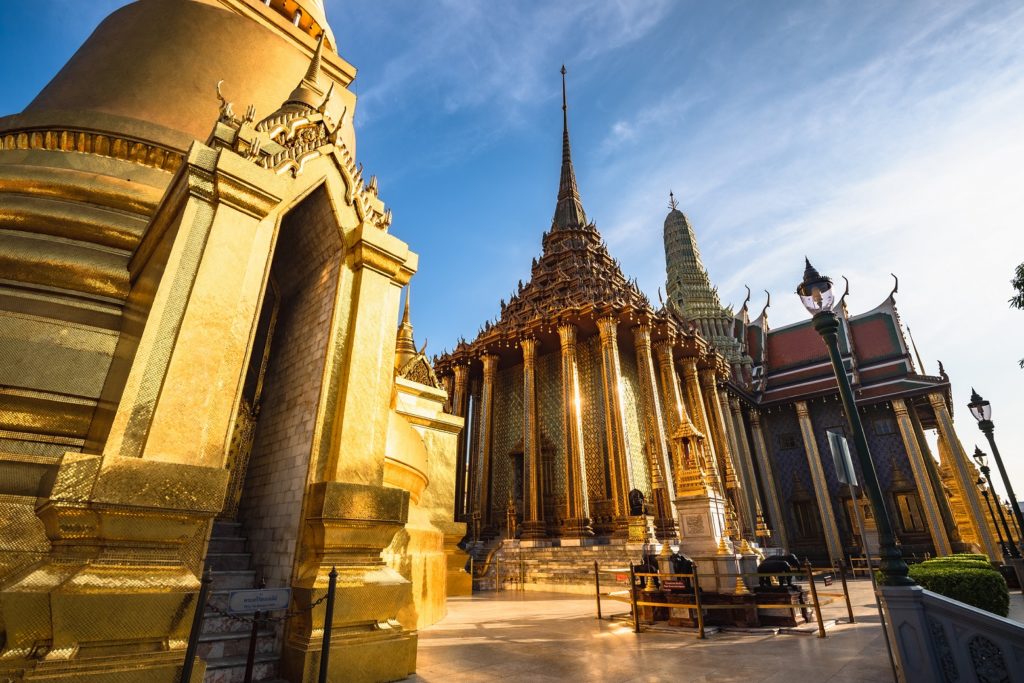 Also known as the Summer Palace, the European-style Bang Pa-In Royal Palace and occasional country residence of the king is an hour’s drive north of Bangkok in the historic city of Ayutthaya. The majority of the structure was built between 1872 and 1889, with the grounds split into two major zones, similar to the Grand Palace. The inner zone is off limits to visitors, as it is reserved for the king and his family, but you are welcome to explore the outer zone which is where royal ceremonies are held. Located on the banks of the Chao Phraya River, its reflection off the water allows for a wonderful phot-op. 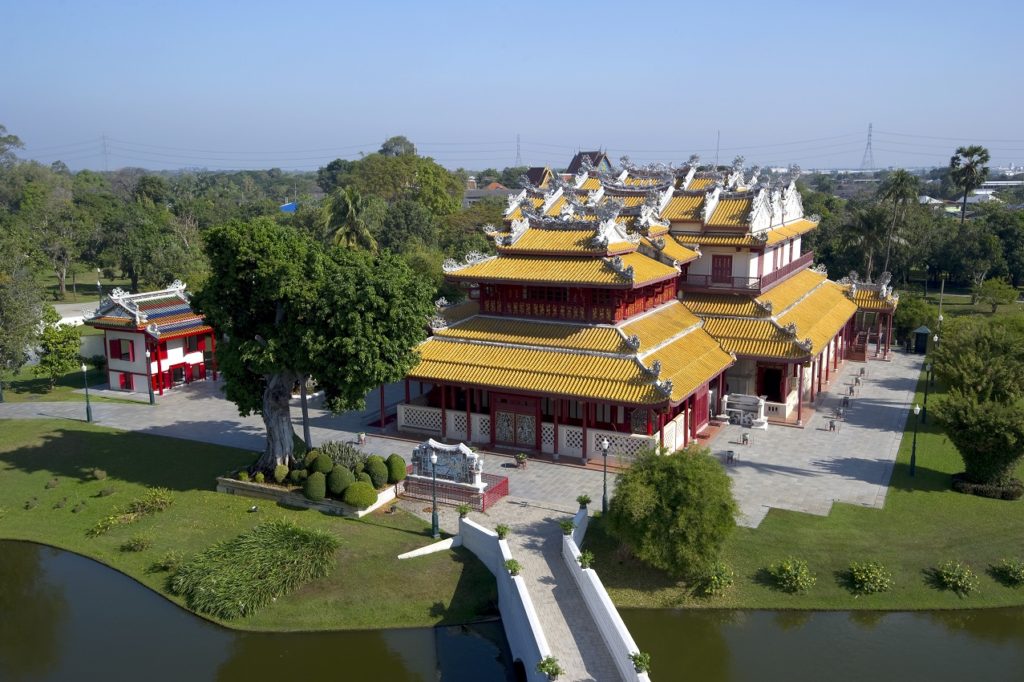 Commissioned by King Chulalongkorn (Rama V) and built just north of Rattanakosin Island between 1897 and 1901 as an alternative primary residence to the Grand Palace, Dusit Palace is made up of many throne halls, European-inspired mansions and other impressive structures. The palace grounds cover an area of over 64,749 square metres and stretch between gardens and manicured lawns with 13 different royal residences. 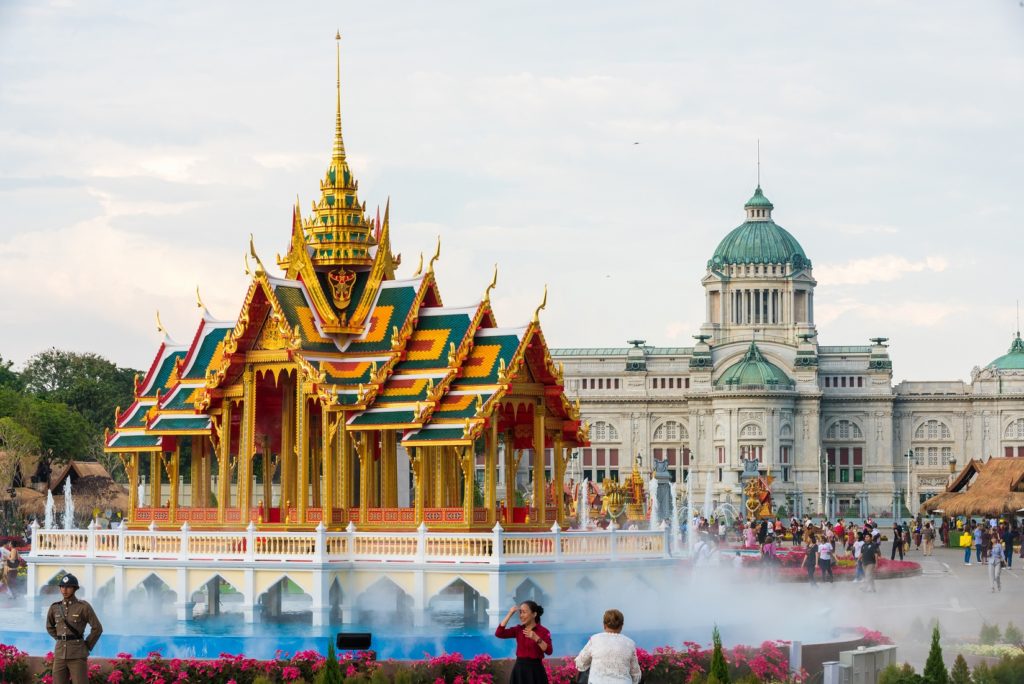 The Royal Plaza on The grounds of Dusit Palace and Sanam Suea Pa, Bangkok

Quite arguably the most magnificent structure on the Dusit Palace grounds is the Italian Renaissance style Ananta Samakhom Throne Hall – ‘the place of immense gathering’. Home to a museum and often used for state events, this two-story structure’s focal point is the dome that sits at its centre, encompassed by six smaller domes. Traditional Thai architecture enjoys Burmese, Chinese, Indian and Khmer influences. The building’s style has evolved to include multi-tiered roof lines and the use of distinctive colours like red and gold. There are detailed ornamental decorations and mural paintings that tell stories from the life of Lord Buddha. 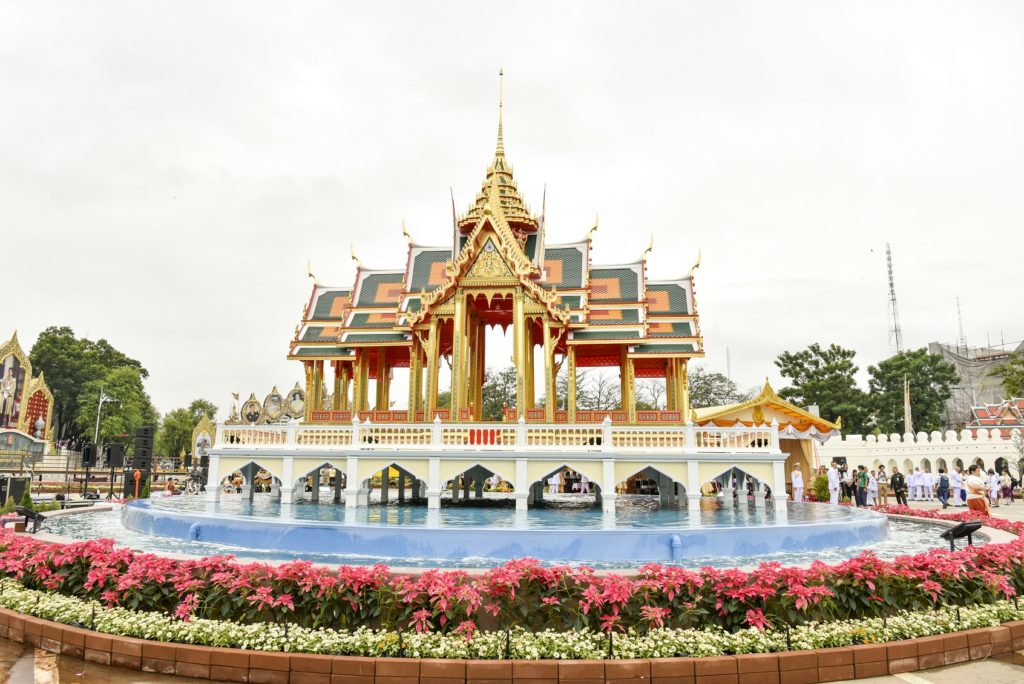 Un Ai Rak Khlai Khwam Nao or Love and Warmth at Winter’s End 2th, at The Royal Plaza on The grounds of Dusit Palace and Sanam Suea Pa, Bangkok

The Vimanmek Royal Teak Mansion is a former royal villa in the Dusit Palace complex that offers a rare opportunity to step back in time and see how the Royal Family once lived, their personal living quarters as well as numerous photos, paintings and personal artefacts.

Note. The mansion is undergoing foundation repairs and will be even better once they’re completed. 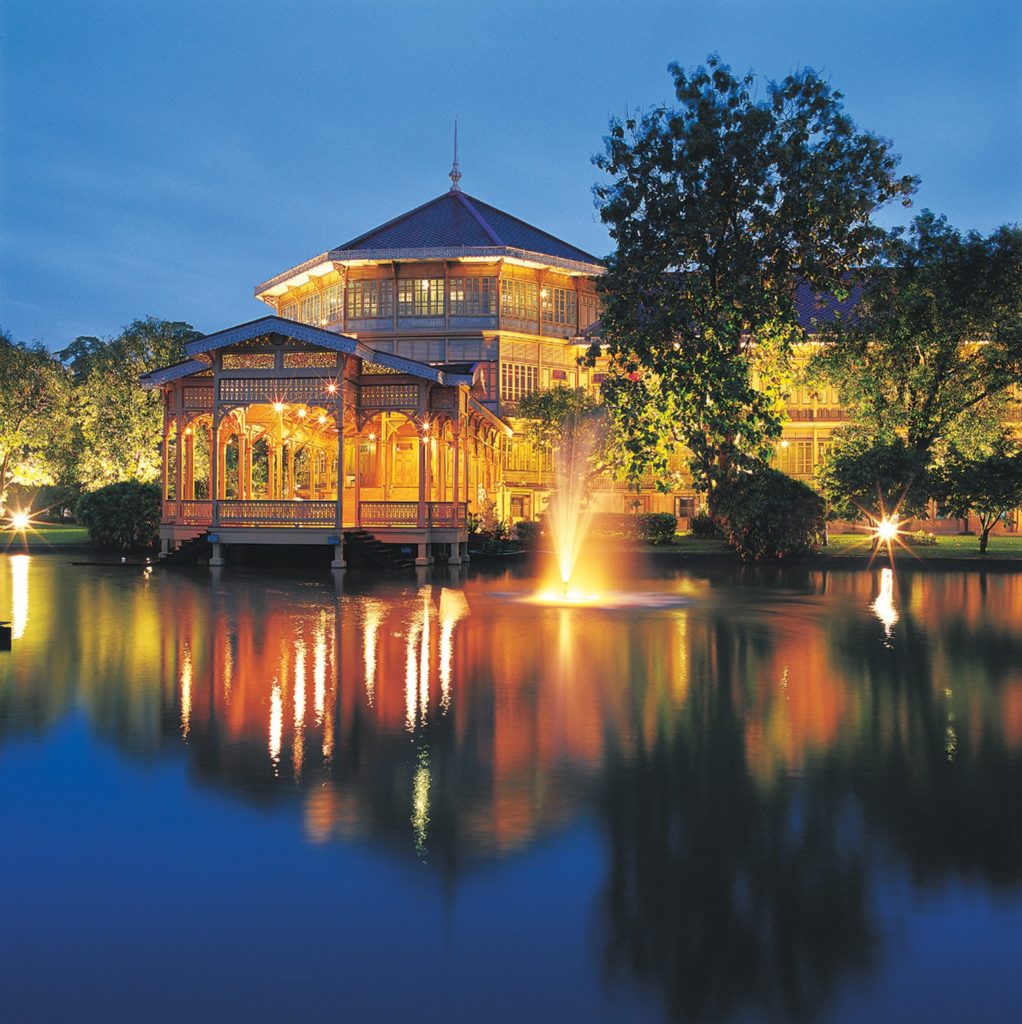 The winter residence of the King, Bhubing Palace sits along the same winding road as the Wat Phra That Doi Suthep, just north of Chiang Mai’s main gates. Built under the supervision of Prince Samaichalerm Kridagara, construction of the palace took only five months to complete with the first ever royals to visit the palace King Frederick the Ninth and Queen Ingrid of Denmark in January 1962. The palace was built in central Thai architectural style called ruean mu or ‘group of houses’. The buildings are on stilts with the upper floor dedicated to the royal residence, while the ground floor houses the royal entourage. There is also a guesthouse for receiving foreign dignitaries. Set in the mountains overlooking Chiang Mai and taking full advantage of the cool mountain air, the Suan Suwaree rose gardens are particularly renowned and worthy of a walk through. 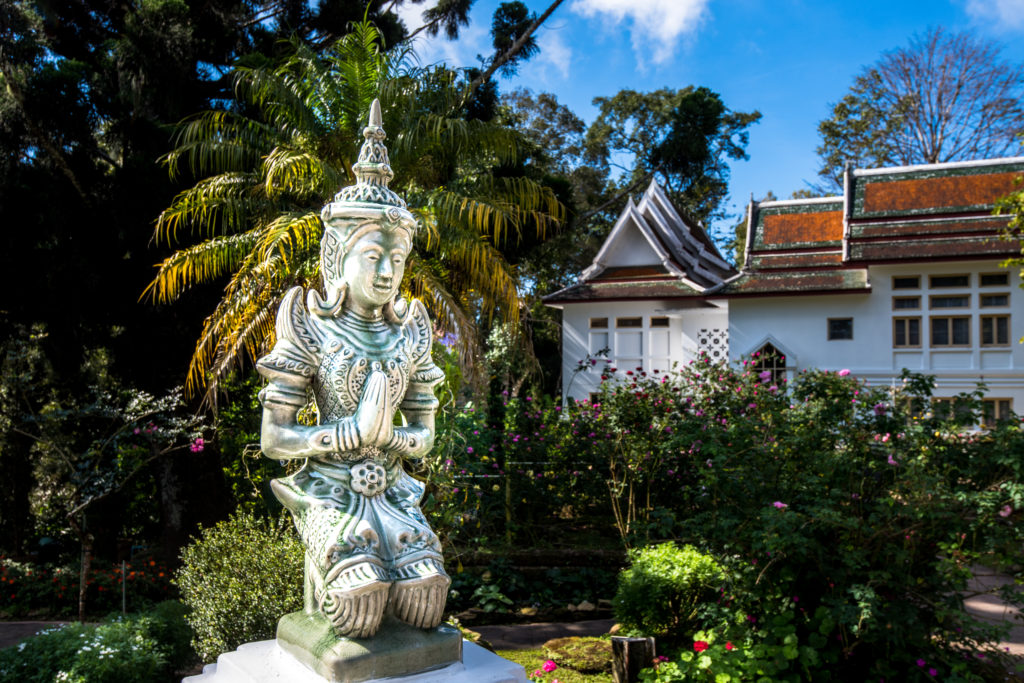 A former royal residence, Sanam Chandra Palace in the Nakhon Pathom Province displays a blend of European and Thai design and architecture intertwined in the five residences and halls that call the palace grounds home. Most noteworthy is the castle-like Chaleemongkolasana Residence. When visiting you are not allowed to photograph the inside of the residence, but are welcome to capture the building’s towers and turrets, as well as enjoy the expanse grounds and scenic parks. 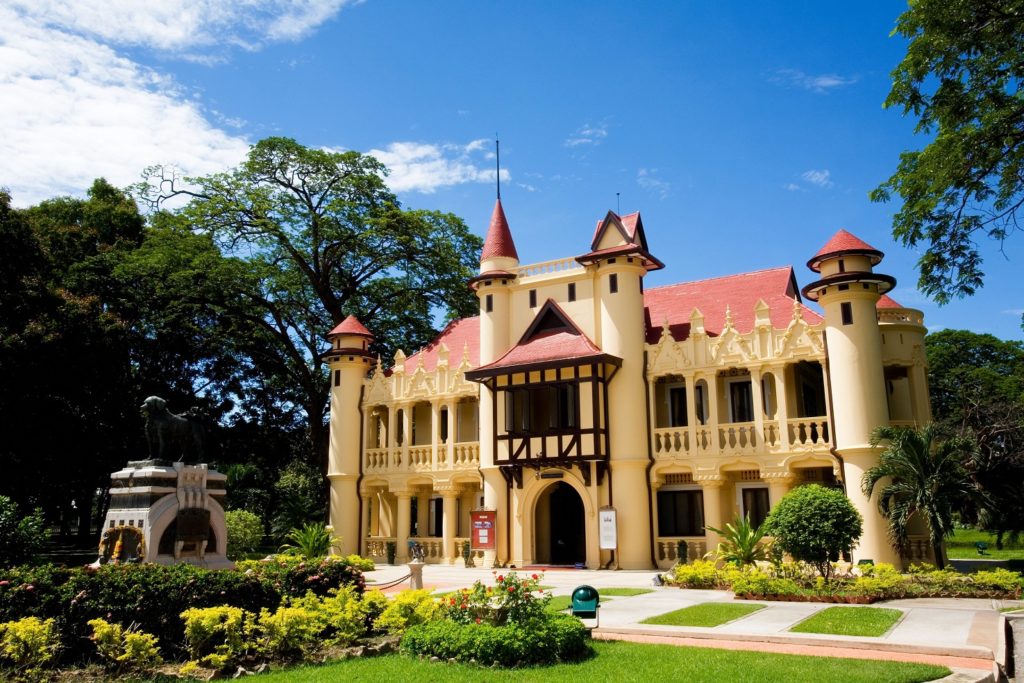