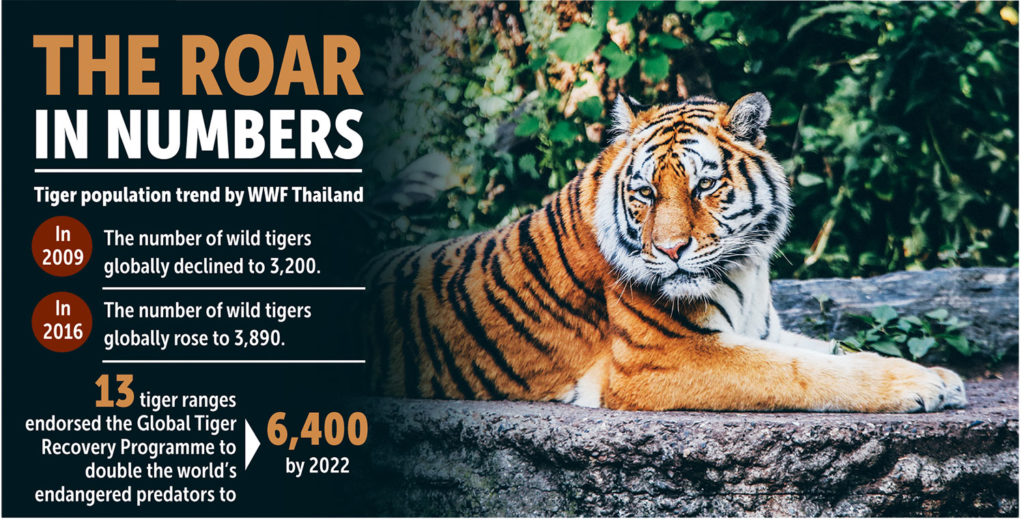 Thailand’s wild tiger population had long been threatened with extinction as a result of poaching, habitat loss and prey depletion; yet conservation efforts are seeing a turn around and increase in numbers, with an estimated 220 wild Indochinese tigers still occurring in Thailand.

According to WWF Thailand, thirteen tiger ranges have been endorsed in the South East Asia Global Tiger Recovery Programme that expands from India, Nepal and Russia to Laos, Myanmar, Vietnam and Thailand – with the express purpose of saving the Panthera tigris tigris that is native to Southeast Asia.

Records reflect that in 2009 the number of remaining wild tigers totalled 3200 globally, which increased to 3890 by 2016. The monitoring of the species and the work being done setting a goal to double the numbers to 6400 by 2022.

In Thailand, the Mae Wong National Park and Khlong Lau National Park that form part of the Western Forest Complex in the country’s northwest along the Tenasserim Mountain Ranges, is where the majority are to be found. Considered one of the most pristine natural landscapes in the Greater Mekong region, the 63,000 square kilometres reserve is home to several endangered species.

Sadly, many wild animals face the threat of poaching and a constant decline in their population. The tiger, one of the most endangered, is an indicator species in these natural forests which provide habitats for the wildlife. To keep the tiger populations thriving, it is important to keep their prey populations healthy too, with both forming part of the ongoing efforts of the reserve management.

A community outreach team educates students and villagers living in the area on the importance of nature and wildlife conservation, hosting hundreds each year and in turn instilling a sense of pride and appreciation for the animals that shares their landscape – in turn empowering them to assist in their protection.

Equipped with an advanced communications system and camera trips, the rangers monitor this great space of land. When cameras recently tracked five female tigers and found three new tiger cubs, it confirmed that the tigers are reproducing in Mae Wong and Khlong Lan National Parks, rekindling hope for the critically endangered species.

Indochinese tigers once roamed far and wide across much of Southeast Asia but over the years have been driven to extinction in Vietnam and Cambodia and are under great threat in Laos and Myanmar. Mostly as a result of being hunted by poachers who sell their pelts and bones on the black market.

Thailand is doing its best to save their remaining wild tigers and has just set up another tiger conservation center in the Huai Kha Khaeng Wildlife Sanctuary, where local forest rangers are trained to protect the critically endangered big cats. The wildlife sanctuary lies in Thailand’s Western Forest Complex, a UNESCO World Heritage Site and home to the remaining 100 to 120 wild tigers.

Over the past years these conservation strategies have allowed the Indochinese tigers to return to areas where they had previously appeared. Knowing that they are there altogether terrifying, exhilarating and humbling.

Diminishing Tiger Numbers in the Wild

In the 19th century as many as 100,000 wild tigers inhabited Asia, today four thousand remain, most of which occur in India. Monitoring them is critical to managing the populations and determining the impact and success of conservation efforts. The Wildlife Conservation Society has warned that unless wild tigers are better protected everywhere, they may go extinct in a decade.

Population growth and increased urbanisation are among the greatest threats to tigers, where constant encroachment by people on their natural habitat is pushing the animals into the last pockets of forest for refuge. Local rangers are tasked with stopping poachers and hunters from decimating the remaining population.

Thailand’s tigers suffer at the hands of poachers. They are further endangered by the poaching of their prey. Although protection measures have been stepped up in the Thai forest complex, poaching remains an ever-present threat in the remaining secure habitats of the Indochinese tiger population. 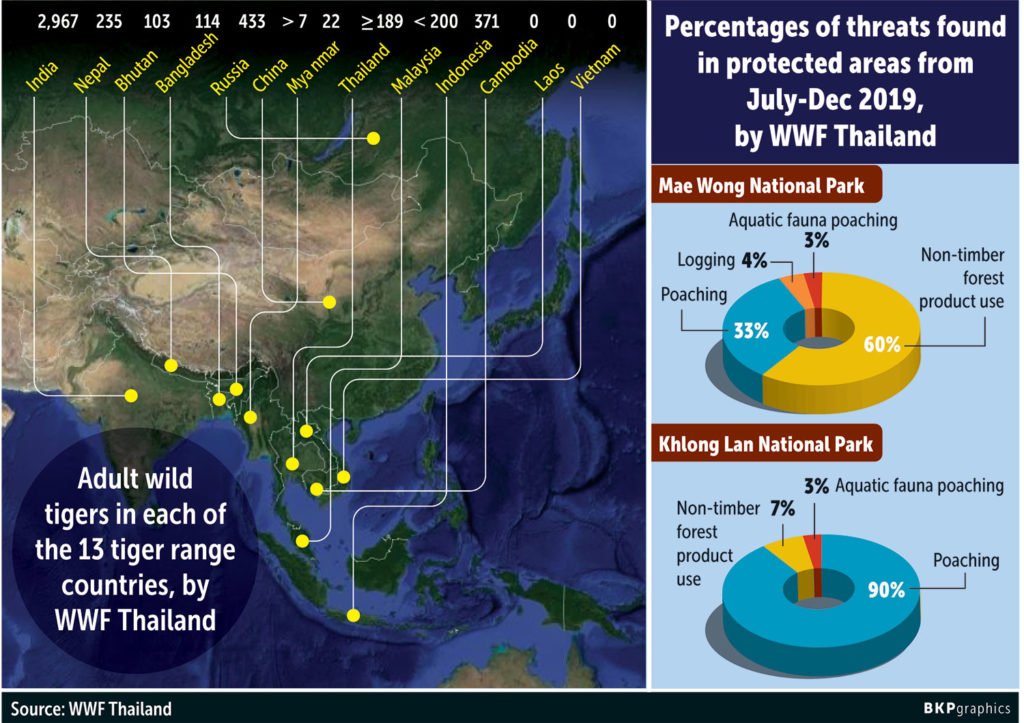 History has shown that humans and animals are intricately connected and when animals suffer, humans suffer too. The World Health Organisation recently estimated that 70% of emerging infectious diseases are zoonotic i.e. passed from animals to humans, and the devasting impact of Covid-19, a novel zoonotic virus, shows what an ecology out of balance can do.

The protection of wildlife is therefore not only about preserving a species such as the Indochinese tiger, but also about retaining a balance in nature, something that is critical to human existence.

How can you help?

Should you wish to back the efforts to protect Thailand’s wild tigers, do not support trade in wildlife or consume wildlife products, specifically those traded on the black market. Help too by creating awareness that wild tigers do roam free in certain parts of Thailand. If in a position, you could support the conservation efforts by contributing financially to https://www.wwf.or.th/ 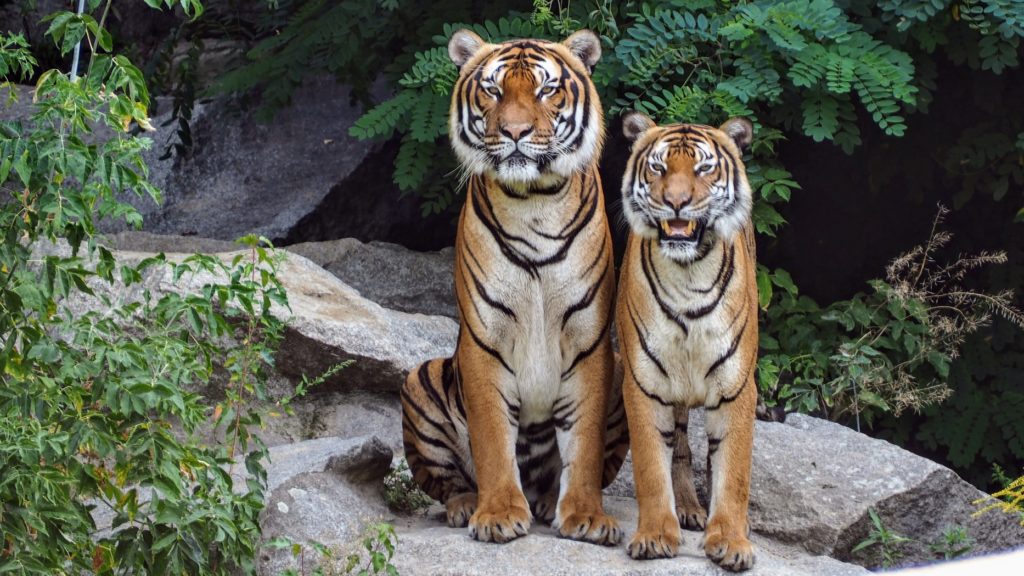