Koh Lanta, just 70km from Krabi town on the Andaman Sea, is one of Thailand’s islands that is best suited to the traveller who is seeking a peaceful destination where life is simpler and the main focus is on beach time, watersports, visiting the local markets and exploring the old town. 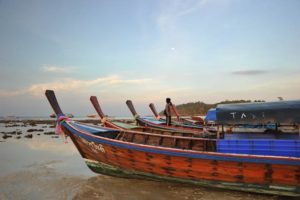 island is Koh Lanta Yai, simply know as Koh Lanta, and together with 50 other smaller islands they make up the 52-island Mu Ko Lanta National Park. Koh Lanta Noi as the smaller of the two islands doesn’t have tourist facilities.

Koh Lanta Yai is more established and home to Si Raya, known today as Lanta Old town, a small, quiet village with 100 year-old shacks and charming shop houses built on stilts over the water. Ban Saladan on the northern tip of the island is the business and commercial center where most visitors arrive. The island has a very diverse cultural mix with Thai-Muslim, Thai-Chinese and the original sea gypsies, all having lived on the island in harmony for hundreds of years.

Flatter than the surrounding islands and with good roads that run the 22km from north to south, Koh Lanta is easily toured by motorbike, allowing an opportunity to sample the authentic mix of cultures at the food stalls and admire the slender minarets and stilted villages you’ll pass along the way.

Many years ago, Koh Lanta’s Old Town acted as the port and commercial center for the island and 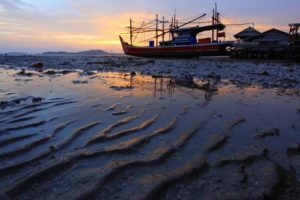 provided a safe harbour for Arabic and Chinese trading vessels sailing between the larger ports of Phuket, Penang and Singapore. Because the east coast is very sheltered all year round, it was perfectly positioned for this, and the spot now known as Koh Lanta Old Town was established as a trading port at the time.

The west coast faces the Andaman Sea and is lined with beautiful white sandy beaches, while the east coast is less developed and offers a glimpse authentic Thai life. It faces the mainland and has a coastline largely consisting of mangroves and impressive limestone rock formations. There are numerous beaches to select from, Klong Dao Beach being the closest to Ban Saladan. This beach is Koh Lanta’s most popular family beach with the island’s highest concentration of resorts and hotels.

Phrae Ae, also known as Long Beach, has 3.5km of white sandy shoreline that features an assortment of low to high-end resorts. Like all of Lanta’s beaches, Long Beach faces south, so the sunsets are wonderful. Kong Khong Beach with it’s laid back atmosphere and small, family-owned and operated establishments, is likely to be more affordably priced. Nearing the south end of the island there is a small bay of clear tropical blue waters called Kantiang Bay that has a couple high-end resorts including the exclusive 5-star Pimalai Resort and Spa.

The Koh Ha Archipelago across from Koh Lanta in the Andaman Sea, offers some of the best conditions for 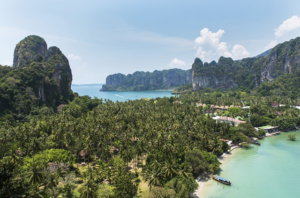 beginner and advanced scuba divers, with excellent visibility and underwater landscapes. Hin Daeng and Hin Muang near Koh Lanta are ranked in the top ten diving sites in the world with more than 200 hard corals and 108 reef fish catalogued. The area also has one of the world’s highest sightings of manta ray, with fairly frequent visits from whale sharks too.

Snorkelling can be done around Koh Haa, Koh Bida and Koh Rok that are all accessible from Koh Lanta by speedboat or long-tail boat. The east side of Koh Lanta is the best place for kayaking, specifically in the mangrove swamps at Baan Tungyeepeng and Koh Talabaeng. The Khao Mai Kaew Caves in the center of the island house impressive stalactites and stalagmites and are not to be missed.

Of course you can sign up for a Thai cooking course and you’d be remiss not to book a traditional Thai massage at one of the many spas on this island.

The nearest airports are Krabi, Trang and Phuket, depending which direction you’re going in. There are 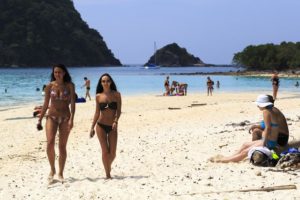 only two main roads on Koh Lanta, one in the northeast and one in the south that runs alongside the beaches. Once on the island, hire a long-tail boat to get to the nearby islands, and a motorbike, taxi or Songthaews to get around. There is even the option of renting a tuk-tuk, should you wish.

The tourist season in Koh Lanta runs from October through April with the most visitors between December and March. An increasing number of people are visiting in between May and October, the rainy season, as the daily showers usually only lasts a few hours.