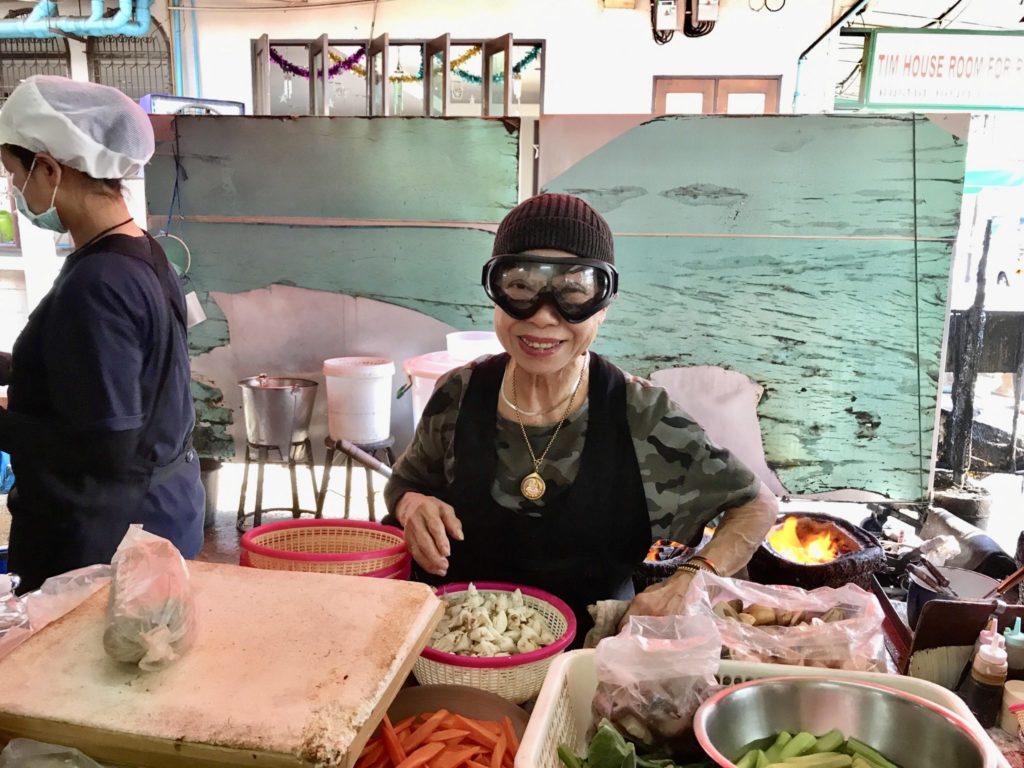 Jay Fai, 71,  has always pulled a crowd. Her eponymous shophouse on Maha Chai Road in Bangkok took pavement Pad Thai to new heights when she first opened it fourty years ago. Since being listed in the city’s inaugural Michelin Guide book that was launched in 2017,  a new wave of fans has descended on her unassuming eatery and demand is off the charts.

A Michelin Star for Jay Fai

At time of writing (May 2018), the diminutive cook was only the third street food chef in South East Asia to win a single Michelin star. When first told about it she was not entirely convinced it as what she wanted and had to be persuaded to attend the ceremony. Today, according to the Bangkok Post, twenty-seven food shops and restaurants in Bangkok and other provinces have been awarded stars in the latest Micheline Guide, with Jay Fai retaining its one-star rating.

Jay Fai cooks solo and plays her recipe cards close to her chest. The long queues and constant stream of locals (always the best indicator), foodies, journalists, bloggers and critics has her on her feet eight to ten hours a day, six day week, and the restaurant’s popularity shows no sign of abating. “Now that we’ve been singled out and interviewed they’re coming at us,” she told the Bangkok Post last year, “oh, I wish I could give the star back already.” Miffed she may have been but the lavish prices Jay Fai is now able to command might just make up for it. Dishes priced from 300 to 1000 Baht (R115-R385) typically cost 50 to 100 Baht at other sidewalk eateries, but 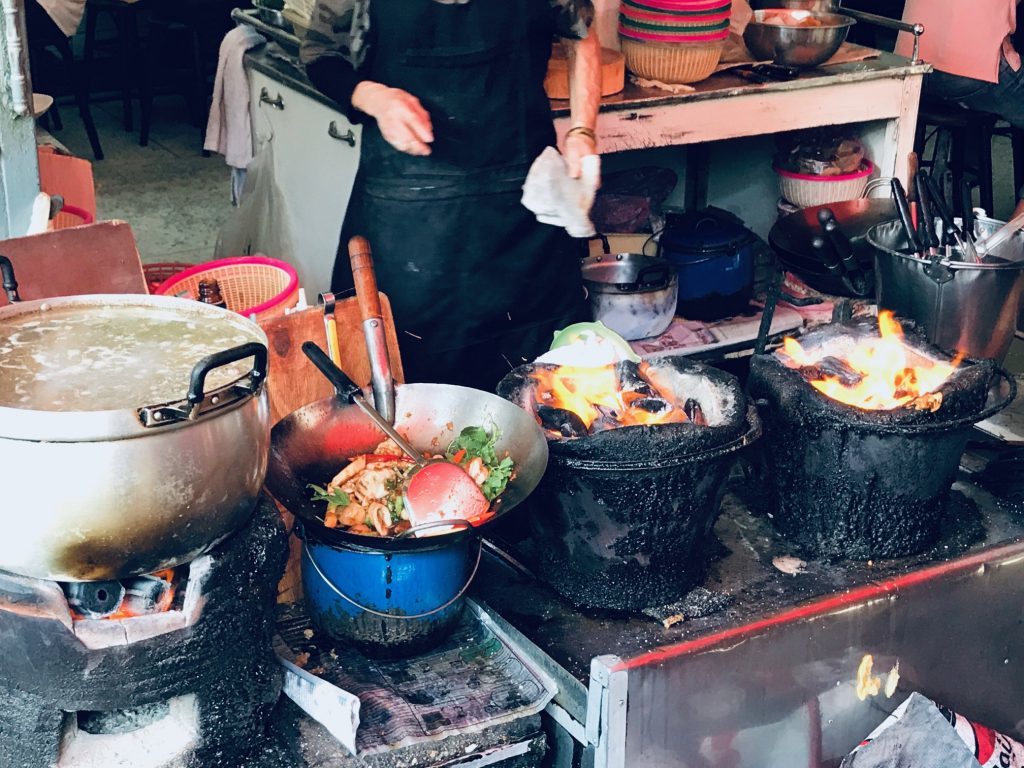 there are a few signature dishes on the two-page menu at Jay Fai, and the giant crab omelette is the one that comes in hot every day, without fail, and has earned her the nickname ‘the omelette queen’. Deep fried in a wok over a charcoal fire, it looks more like a plump burrito and is served without fanfare on a plastic plate atop a paper napkin. The Guay-tiew-phad-see-ew Talay, made with stir fried rice noodles, egg, sweet soya sauce, mixed vegetables and enormous succulent prawns, is also an excellent choice, a noodle heap dense with flavour and intoxicating Thai aromas. 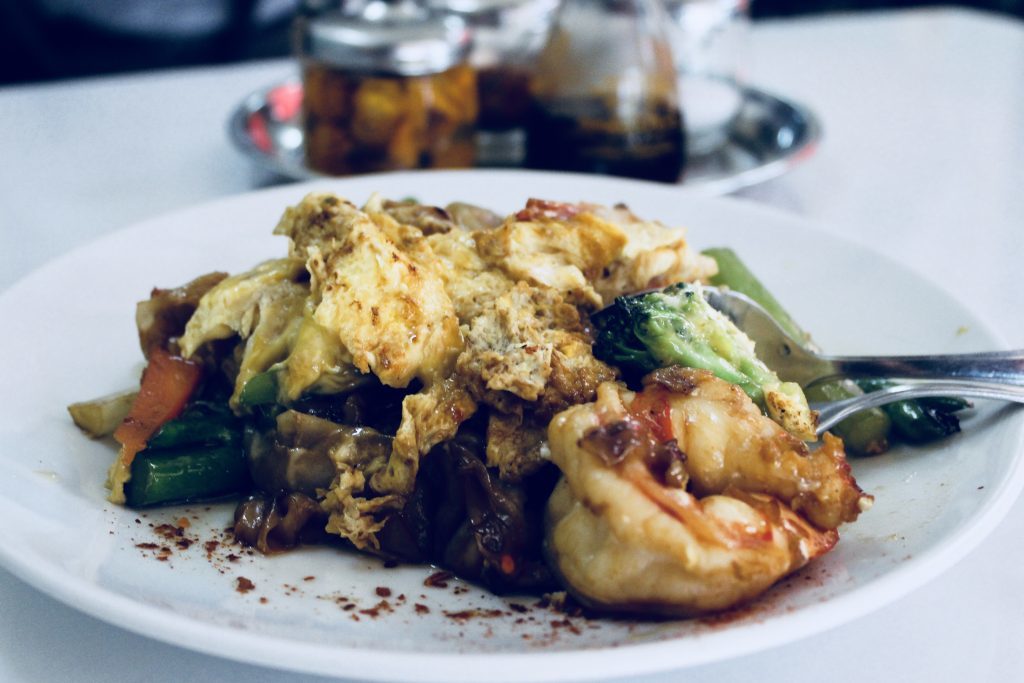 Jay Fai, whose formal name is Supinya Junsuta, was born in 1945 to Chinese immigrant parents who sold chicken noodles for a living. Instead of joining them in the business, she took work as a seamstress until a turn of events saw her open her own restaurant in the 80’s in the Phra Nakhon District, home to iconic landmarks like Wat Pho Temple, the Democracy Monument and further down on the grittier side of town, Khao San Road with its cluster of Bohemian bars, backpacker lodges and tattoo parlours.

As a rookie cook in her mid -thirties, Jay Fai kept to basics like congee (porridge) and mostly referenced her mother’s recipes, but as her confidence grew she experimented more, upped the diversity and expanded the offering to include wok-cooked seafood dishes that have since become her forte. She has always been fastidious about quality and is said to travel the length and breadth of Bangkok daily to procure the freshest of ingredients. Her excellent reputation dates as far back as 1999 when a reviewer hailed her as “one of those increasingly rare Mozart’s of the noodle pan who can transform very ordinary, lunchtime-at-the-market dishes into masterpieces of local cuisine,” and celebrity Martha Stewart once rated her the best cook in Thailand.

At Jay Fai you are paying for an experience. She herself is the main attraction as she gets down to business in full view of a diverse clientele, many of whom gather around to film and photograph her as she flamboyantly lifts and swirls the pans before ladling the steaming contents into rows of waiting bowls. At age 73 and with remarkable energy, she moves tirelessly back and forth in her rudimentary set up, hustling between two charcoal braziers and counter tops crammed spices, sauces and the tools of the trade. 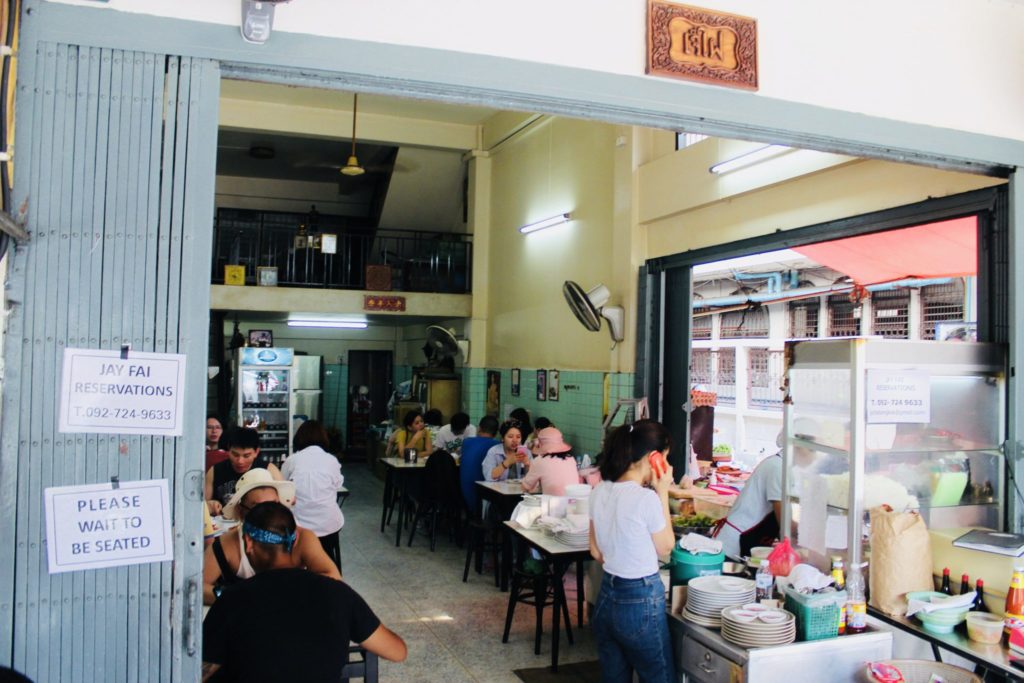 The day I met Jay Fai she was, as usual, impeccably groomed, wearing her signature red lipstick, Despicable Me goggles camo t shirt and mauve wellies. I instantly loved her vibe and I can’t wait to return.

*Don’t forget to book in advance. 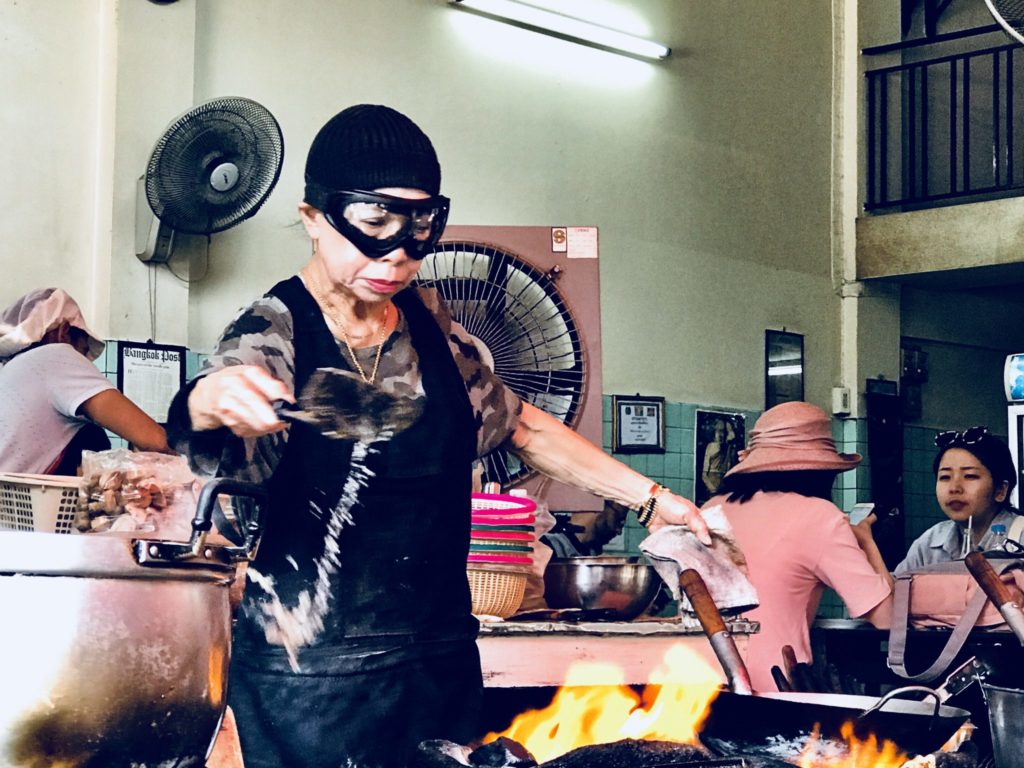 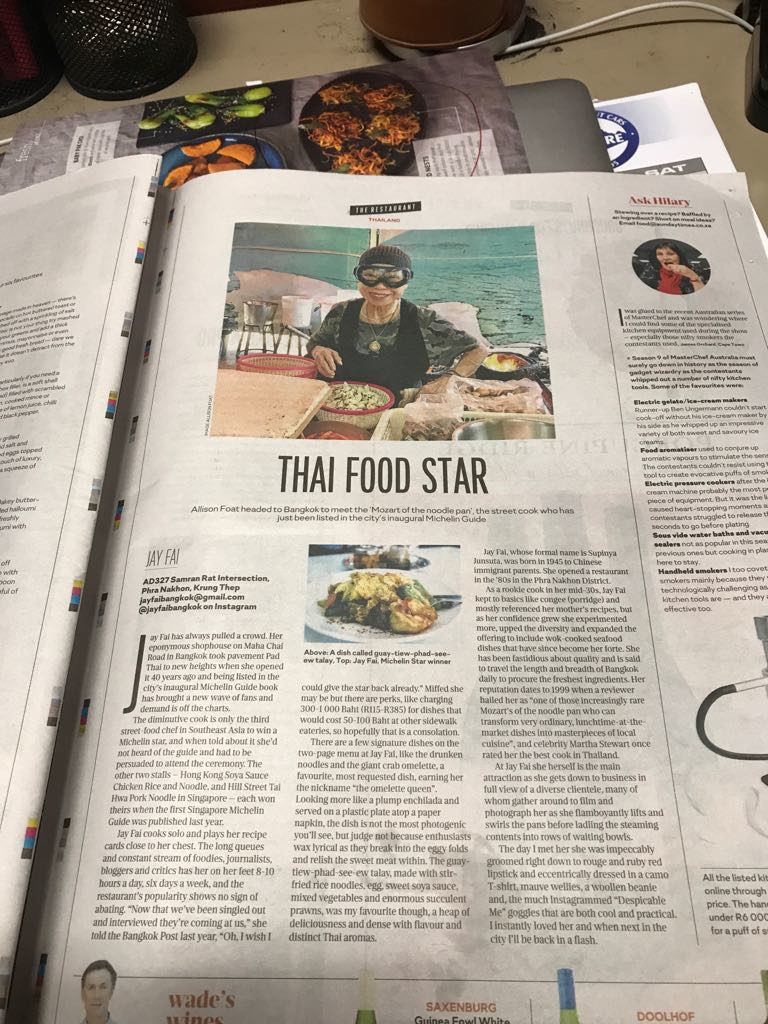