A Closer Look at Samut Prakan

A Closer Look at Samut Prakan

Samut Prakan is a central Thai province just twenty-five kilometers south of Bangkok at the mouth of the Chao Phraya River. On the river’s east bank is the Ancient City, an expansive outdoor museum with scaled-down replicas of historic temples, old cities and palaces. Beyond a huge triple-headed elephant statue crowns the Erawan Museum, which has impressive art and religious relics.

The old section of the district is referred to as Pak Nam, which means “river mouth”, an appropriate name for the city at the mouth of the Chao Phraya River. Samut Prakan Province covers over a 1000 square kilometres of seasonally flooded plains that are crisscrossed by canals as they lead the 50 km of river coastline to the Gulf of Thailand.
Samut Prakan is not on the mainstream tourist map, however because of its close proximity to Bangkok many visitors do make day trips. Samut Prakan has a large expat community and English is widely spoken with good shopping and restaurants. This is a good place to experience a mostly unseen Thailand.

Close enough to Bangkok for a day trip, it deserves to be considered for a long stay. These are some of the places to visit while there. 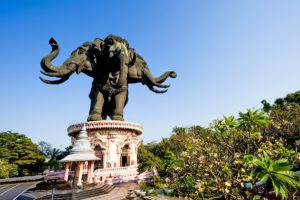 You can’t help but notice the giant three-headed elephant from Sukhumvit Road as you drive into Samut Prakan. This is the Erawan Museum that contains the world’s largest elephant at about 50 metres – or 15 storeys tall. Owned by the same company as Ancient Siam, the five storey museum inside the elephant contains various artefacts. You can start at the base, before heading right into the belly of the elephant for a guided tour. Don’t miss the little window and its views of the surrounding area.

Phan Thai Norasing Shrine is regarded as the symbol of honesty by the local people and was erected as a memorial to Phanthai Norasing, a man of integrity from the Ayutthaya period. Many visitors come here to worship and give offerings for a better life. You can cross over the creek to a market with lots of foods stands and a few other items for sale.

Ancient Siam is a museum park constructed by Lek Viriyaphant that occupies almost a square kilometre in size. Considered the world’s largest outdoor museum it features 116 structures of Thailand’s famous monuments and architectural attractions laid out roughly in the shape of the kingdom with the monuments lying in their geographically correct places. Some of the buildings are life-size replicas, while others are scaled down. They were constructed with the assistance of experts from the National Museum to ensure historical accuracy. 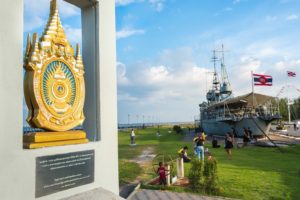 The Naval History Park at Chulachomklao Fortress is situated at the mouth of Chao Phraya River and is home to an impressive monument of King Rama V. Chulachomklao Fortress is a modern fort and played an important role in protecting Thailand during both World Wars. Well worth visiting as it shows how King Rama V prepared and constructed this stronghold against European nations who were looking to expand their colonies. This fort was once used to fight against French warships.

One of the first sights that greeted foreigners arriving in Thailand 150 years ago was a brilliant white pagoda on an island in the middle of the river. The locals called it ‘Phra Chedi Klang Nam’, or Pagoda in the river. The island was caused by the build-up of sand brought down by the flood waters. Over the years the river silted up and the island became part of the west bank. Now the temple is better known by its official name of Phra Samut Chedi.. Inside the pagoda you can see Buddha’s relics, Phra Chai Wat and Phra Ham Samut Buddha images. 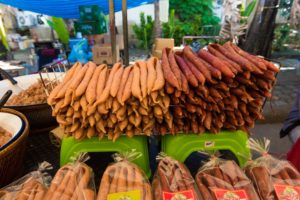 Bang Nam Phueng Floating Market was built in 2004 as a venture by the local government to assist with resolving an oversupply of agricultural products and assisted with creating employment and income for the local community. Local products and food such as fish-scale flowers, herbal joss sticks, fried mussel pancake are on sale. You can rent a rowing boat to join the vendors on the water, or take a bicycle tour to experience the lifestyle and visit the surrounding fruit orchards.

How to get there:

The Skytrain Green Line along Sukhumwit Road to Samut Prakan opened on 6th December 2018 making the area directly accessible. For transport to and from the Airport – you can go by either taxi or bus. Once in Samut Prakan getting around is easy and affordable.